April reads are adult books and this month ,since I have finished the last two months stacks, I will finish the adult books.

SUMMARY : Lieutenant Jonathan Stride is suffering from an ugly case of déjà vu. For the second time in a year, a beautiful teenage girl has disappeared off the streets of Duluth, Minnesota--gone without a trace, like a bitter gust off Lake Superior. The two victims couldn't be more different. First it was Kerry McGrath, bubbly, sweet sixteen. And now Rachel Deese, strange, sexually charged, a wild child. The media hounds Stride to catch a serial killer, and as the search carries him from the icy stillness of the northern woods to the erotic heat of Las Vegas, he must decide which facts are real and which are illusions. And Stride finds his own life changed forever by the secrets he uncovers. Secrets that stretch across time in a web of lies, death, and illicit desire. Secrets that are chillingly…immoral.

SIDENOTES: I did start this in January but because of illness in the family I was forced to abandon it. I will finish it this time around.

SUMMARY: As a practiced reporter until her newspaper went to that great pressroom in the sky, P.I. Tess Monaghan knows and loves every inch of her native Baltimore, even the parts being slobbered on by the sad-sack greyhound she's minding for her uncle. It's a quirky city where baseball reigns, but lately homicide seems to be the second most popular local sport. Business tycoon "Wink" Wynkowski is trying to change all that by bringing pro basketball back to town, and everybody's rooting for him; until a devastating, muckraking expose of his lurid past appears on the front page of the Baltimore Beacon-Light. It's a surprise even to the Blight's editors, who thought they'd killed the piece. Instead, the piece killed Wink, who's found in his garage with the car running.

Now the Blight wants to nail the unknown computer hacker who planted the lethal story, and the assignment is right up the alley of a former newshound like Tess. But it doesn't take long for her to discover deeper, darker secrets, and to realize that this situation is really more about whacking than hacking. It's just murder in Baltimore these days, and Tess Monaghan herself might be next on the list.

SIDENOTES: I read the first in the series years ago. This has been sitting on my shelf for what seems like forever. Finally it made it way to my read pile.

SUMMARY:
A killer dubbed "The Night Prowler" has turned the city that doesn't sleep into a town kept awake by terror. Unseen, he enters couples' homes. Unsuspected, he lingers until the perfect moment arrives. He leaves "gifts" for his victims - before taking their lives. Enter ex-homicide cop Frank Quinn, still reeling in the wake of an elaborate setup that ended his career. For Quinn, this isn't just any job - it's a last chance to salvage his reputation. As the investigation proceeds, the murderer loses no time stalking new prey: a loan officer and her high-earning husband; a couple who made a killing in the stock market; a pretty actress and her prosperous lover. With the body count rising, it's up to Quinn to unlock the mystery of a madman's past and end his bloody reign. Quinn's got his work cut out - because in a city the size of New York, anyone of eight million faces could be that of a killer or his next target.

SIDENOTES: I have read several of this authors works and loved them. This is a new series I have been wanting to start 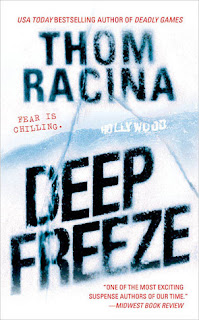 SUMMARY: Sub zero temperatures slice across the beaches of Santa Monica. A blinding blizzard whips through Hollywood. Swimming pools turn to solid blocks of ice. Roads are impassible. Cars have been abandoned. And as night falls, so does hope...

SIDE NOTES: Okay this book has been sitting on my book shelf for years and I want to read it because I have enjoyed other books by this author. I have seen very mixed reviews about this book and I am hoping for the best.
﻿