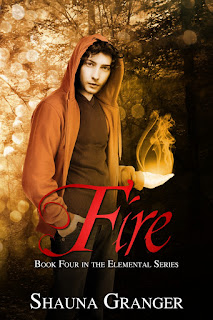 Title: Fire (Elemental, #4)
Age Group: Young Adult/New Adult
Genre: Urban fantasy
Expected Release: December 18, 2012
Cover Design: Mooney Designs
Cover reveal organized by: AToMR Tours
Goodreads  http://www.goodreads.com/book/show/16090522-fire)
Summary
Demons, faeries, and mermaids. Claws, teeth, and nightmares.
They have been beaten and bruised, set on fire, and nearly drowned, but manage to always find their way home.  Over their last Winter Holiday break before college, Shayna, Jodi, and Steven try again to put aside the magic in their lives for a little mundane fun. But Shayna's mother is having dreams of fire and death. A mysterious stranger by the name of Liam has just arrived in town. And Shayna's attempts to manage her new angelic powers are set back by Steven's insistence that the trio intervene in a riot outside of a concert, with disastrous consequences.
In her attempt to stop the riot, a man sees Shayna use her magical abilities – a man driven mad by watching his brother die at the hands of a black witch. He stalks Shayna, plotting to destroy her and her friends. With her mother’s warnings echoing in her mind, Shayna is now in the fight of her life against an unlikely foe: a human man.

Bio:
Like so many other writers, Shauna grew up as an avid reader, it was in high school that she realized she wanted to be a writer. Five years ago Shauna started work on her Elemental Series and released the first installment, Earth, on May 1, 2011. When not reading and writing, Shauna enjoys cooking and playing hostess whenever she can.
Posted by K_doran at 11:22 AM